The zinc roof of this much-loved landmark was restored to its former glory for the benefit of of the whole seafront, earning Full Metal Jacket the Fully Supported Metal and Roof of the Year Award.

Located a stone’s throw from Ramsgate’s beach, 1,858 sqm Edwardian pavilion has been the centrepiece of the town’s sea front since its construction in 1903. The building was designed as a concert hall and assembly rooms, complete with a sun deck, the stand-out feature being its zinc roof. Unfortunately, the Grade II listed Pavilion, which had been unoccupied since 2008, suffered extensive fire damage in 2011 and the derelict building had become an eyesore. Then in 2016, the Weatherspoon’s pub chain began its £5m renovation to make it the chain’s largest pub and Full Metal Jacket were commissioned to restore the roof to its former glory. The project involved the removal of the existing zinc covering and renewal of the crown and curved mansard roofs, as well as re-establishing ten circular dormer windows that were part of the original design in 1903. As the project was a listed building, Full Metal Jacket had to keep the original design concept while incorporating up-to-date ventilation details. The most striking feature of the building is its zinc roof, comprising a crown and mansard roofs, which Full Metal Jacket completely re-established, along with ten circular dormer windows. The original design features had to be maintained, while incorporating up-to-date ventilation details.

What the Roofing Awards 2018 judges said:

“The judges voted unanimously for the level of craftsmanship demonstrated by Full Metal Jacket and the level of commitment to quality they had maintained despite the exposed location of the building. The judges were impressed by the aesthetics of the roof and its contribution towards the restoration of this former local landmark from a derelict eyesore, into a centre-piece of Ramsgate’s sea front. The judges therefore felt that in addition to the technical excellence demonstrated by Full Metal Jacket, the Royal Victoria Pavilion project also exemplified how a roof could have a direct positive impact on a local area for the benefit of the community.” The team had to contend with all weather on this exposed site on Kent’s North Sea coast.

Since being founded in 1996, Full Metal Jacket 1996, has worked with architects, planners and developers, bringing schemes to life with the use of Lead and Metal to give the best protection, an ageless style and yet practical solutions to roofing and cladding the world over. 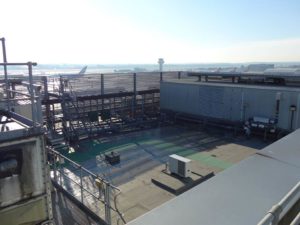